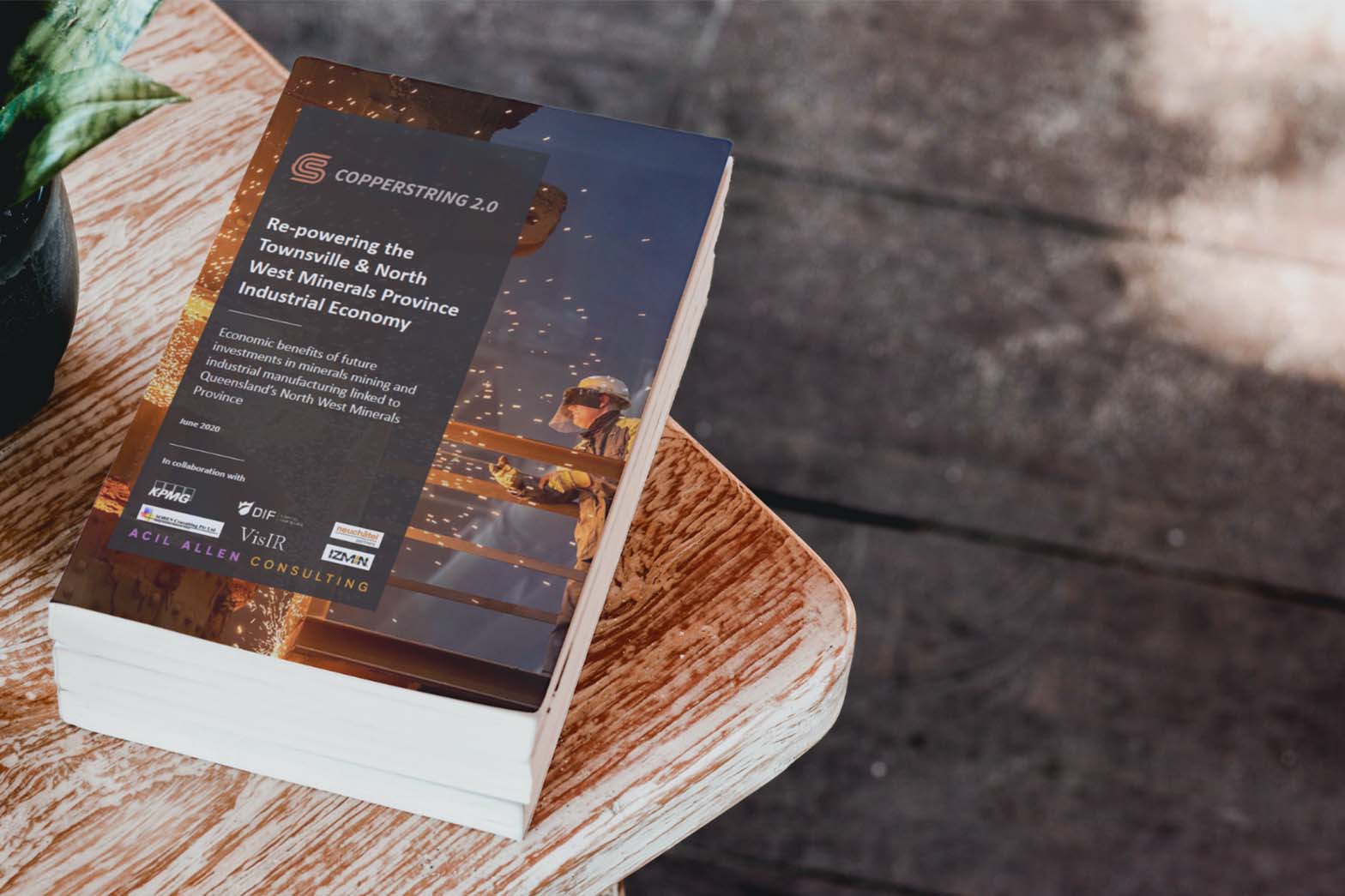 A landmark independent study has been completed to assess the impact of the CopperString 2.0 Project on minerals mining and processing in the North West Minerals Province (“NWMP”) and export through the Port of Townsville. The summary report “Re-powering the Townsville & North West Minerals Province Industrial Economy” will be released on Wednesday with findings that include Queensland’s aggregate Gross State Product will increase by a massive $139 billion over 30 years, and an additional 3,560 Full Time Equivalent Jobs will be sustained in North and North-West Queensland out to 2050.

The implications for Townsville and Northern Queensland are very significant.  According to the Queensland Resources Council approximately 10% of employment in the Townsville region is supported by the resources sector, a number that is likely higher as other sectors have suffered significant employment reductions due to COVID-19.  CopperString has received strong support from the Australian Government and Queensland Government, and all local MPs from the ALP, LNP and KAP.

In the face of a global pandemic, unprecedented economic challenges in modern times and acute geopolitical risks  Queensland and Australia are at a crossroads; undertake economic reform and infrastructure investment to grow productive capacity and strengthen the economy, or follow a business as usual approach.  For Northern Queensland business as usual will result in one of the world’s best minerals resources worth an estimated $680 billion remaining underdeveloped, and Australia’s best combination of clean energy resources remaining stranded. Maximising the long-term economic benefit from these natural resources of critical minerals and the strategic value of strengthening utility and industrial infrastructure across key geographies such as Northern Queensland should be a priority for National Cabinet.

The game changer is cheaper and more flexible electricity supply from the proposed CopperString 2.0 project, an 1,100km high voltage transmission network that will deliver the nation’s largest geographic expansion of the National Electricity Market (“NEM”) and integrate the NWMP into the national transmission grid. The Study found that by removing the barrier of isolation from the national transmission grid for the NWMP aggregate gross minerals production was forecast to increase by $154 billion over 30 years.

The summary report – “Re-powering the Townsville & North West Minerals Province Industrial Economy” – highlights the growing strategic importance of critical minerals supply chain security to Australia and its allies.  In May 2020, the International Energy Agency released a paper identifying the risk posed by minerals supply chains linked to new technology and clean energy that were controlled by China and other countries including the Democratic Republic of the Congo.

CopperString 2.0 Founder, Townsville businessman Mr John O’Brien said CopperString is a transformative project because it will fill the “missing link” connecting world-class natural resources – minerals and clean energy – with our National Electricity Market and unlock the enormous industrial manufacturing and export opportunity afforded by Northern Queensland. Major common use infrastructure that increases productive capacity for key sectors of the Australian economy is essential to sustain and grow prosperity.

“Common use infrastructure investment is essential for our region to sustain global-competitiveness through lower prices and lower emissions intensity for our minerals and fertiliser manufacturing industries and it’s these industries that sustain thousands of jobs and add billions to Northern Queensland’s economy each year and for decades to come.” Mr O’Brien said. “The economic and strategic drivers for growing the Townsville and NWMP industrial economy have never been more important and the study findings we are releasing this week demonstrate the enormous opportunity if we can continue our collaboration with State and Federal Governments to deliver this game-changing infrastructure.”, Mr O’Brien commented.

The landmark study undertaken by a consortium of highly regarded geology and mining consultants, including leading global advisory firms and subject-matter-experts is believed to be the most comprehensive investigation and modelling of energy cost impacts on the NWMP ever undertaken. The study has been provided to the Prime Minister and the Queensland Premier and the National COVID Coordination Committee through Chair Nev Power. The largest beneficiaries of unlocking the NWMP and increasing value-adding minerals production are the Australian and Queensland economies, and the Federal and State budgets.

Mr O’Brien said the study showed the significant positive impact that unlocking the NWMP via CopperString 2.0 can deliver with real income, a measure of economic welfare (the ability to purchase goods and services), for Australia and Queensland is forecast to increase (compared to the business as usual case without CopperString) by a cumulative total of $78.3 billion and $54.3 billion respectively over 30 years.

Despite the world-class known minerals inventory and surging global demand linked to new technology Queensland will not realise the benefits of this opportunity if electricity prices in the NWMP remain approximately 2 times higher than competing countries, according to this study.

Importantly for Queensland, the independent study forecasts CopperString 2.0 will increase minerals-sector production in the NWMP and drive a massive increase in aggregate State royalties of $6.4 billion out to 2050. As Queensland considers long-term economic strategies in response to COVID-19 these royalties will provide the people of Townsville and North West Queensland with a steady revenue stream over coming decades and help underpin the State’s service delivery requirements for schools, hospitals, police, doctors, nurses and other essential services.

The Study identified over 70% of the $680 billion of known resources in the NWMP are so-called “New Economy” minerals or “Critical Minerals” linked to new technology and providing new advanced industrial manufacturing opportunities for Townsville and Northern Queensland, such as Copper, Cobalt, Gold, Graphite and Zinc and rare earth elements, including Molybdenum, Dysprosium, Rhenium and Holmium.

Mr O’Brien said the opportunity for Queensland from the NWMP was real and could clearly last for generations given the size of the know resource base and importance of commodities like cobalt that are critical for use in rechargeable batteries, in mobile phones, laptops, tablets, electric vehicles and hybrid electric vehicles and electric trains, and rare earth elements such as molybdenum that improve the strength of steel at high temperatures and is also alloyed with steel to produce drills, jet engines and power-generation turbines.

“The independent study findings presented in this summarised report illustrate the enormous opportunity for Northern Queensland from our natural minerals and energy resources, and CopperString is very determined to play it’s role through collaboration with the Queensland and Australian Government’s to deliver major common use energy infrastructure that grows sustained prosperity, employment and strategic resilience for the North.” Mr O’Brien said.

“For CopperString we need to bed-down an Implementation Agreement with the Queensland Government secure financing support from the Australian Government and the Northern Australia Infrastructure Facility, and continue our approvals and engineering work to ensure we remain on track to commence construction in the first half of 2021”, Mr O’Brien said.

Building major common use infrastructure that delivers long-term macro-economic benefit and advances strategic industrial manufacturing objectives can only be achieved with the firm support of the Queensland and Australian Governments and local communities.